"GATTI" - This wonderful cologne is in tribute to my cousin Brian Gatti hense the name “Gatti.” This woody aromatic fragrance is made of orange, lemon, fir, petit grain, cardamom, rosemary, musk, oakmoss, vetiver and black coconut.

"Gatti" was created in tribute to my cousin, Brian Gatti.  He was the wonderful son of Fran & Garry Gatti. Loving brother to his siblings, Jimmy, Joseph, Elizabeth & Holly. He was a man who always put others before himself. An army soldier who gave years of his life for his country. A friend. My cousin. He will be missed.  May he smile from above every time "Gatti" is sprayed. 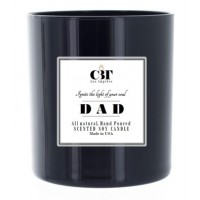 A special Candle created for a "Special" person. The "DAD" Soy Candle comes in our 10oz  Black ..